Which Presidential Candidate Will Save You The Most On Housing 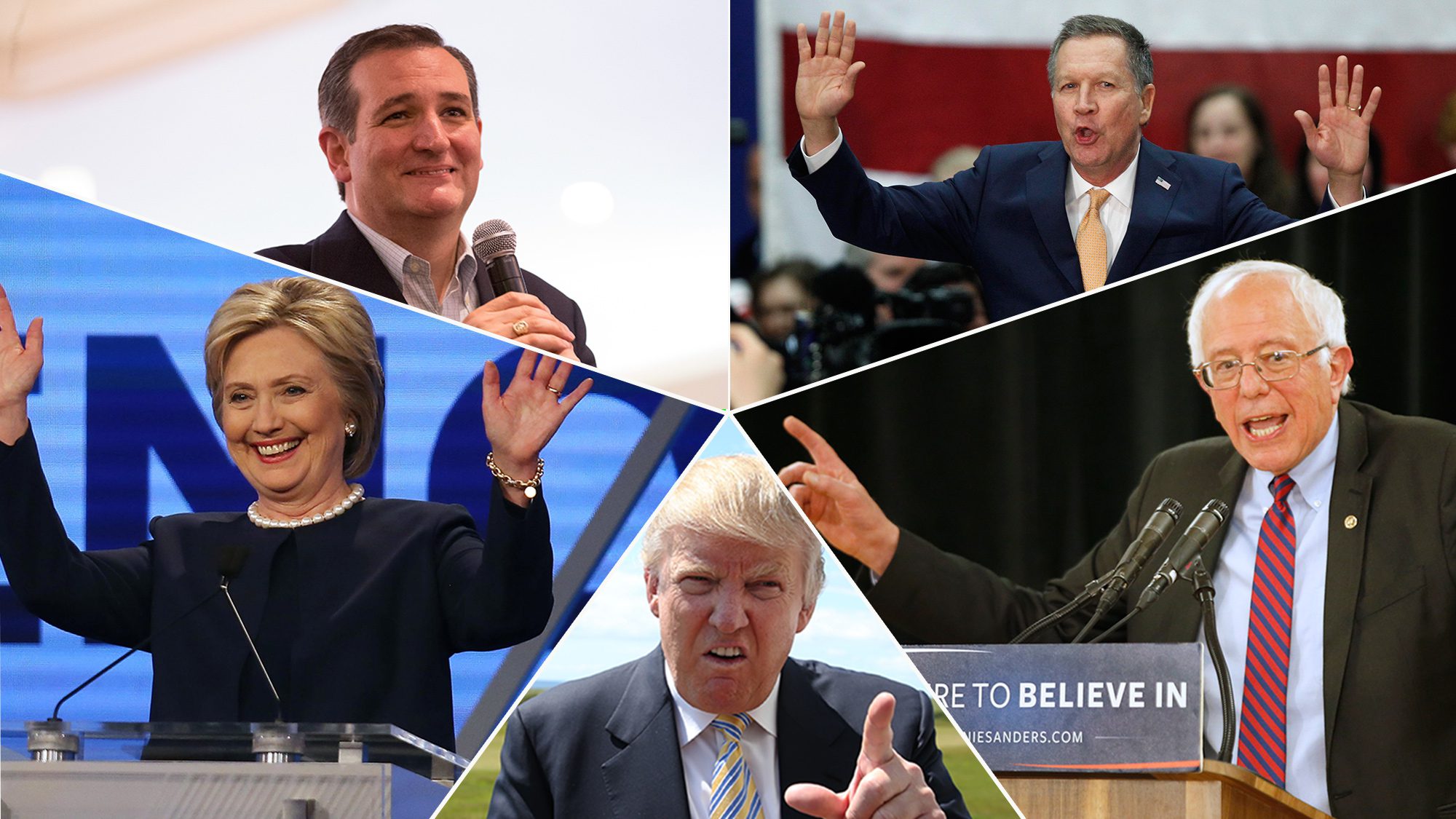 The most unpredictable, most divisive, and certainly weirdest presidential race in a generation (or several) is heating up way beyond the boiling point. Candidates are debating just about everything imaginable on the 2016 campaign trail: 2,000-mile walls! Hand size! Energy levels! Email servers! Resemblance to Christian rockers! Everything, that is, except the largest and most important purchase most Americans will ever make: their homes.

In a campaign so far marked by a maddening lack of specifics on many policy issues, most candidates have been especially silent on how their ideas on taxes, interest rates, and even income redistribution would affect the home market.

So to whom should would-be home buyers or sellers turn on Election Day?

Despite the candidates’ general reluctance to lay out housing plans, we took it upon ourselves to read the tea leaves, decipher the smoke signals, and consult with our Magic 8 Ball to predict what each would-be commander in chief could mean for those actively in the home market—and their bank accounts.

So let’s hit the ballot booths!

The good news: Mortgage interest deductions are here to stay

First up: Both the Democrats and the Republicans plan to leave the mortgage tax deduction alone.

The perk helps property owners lower their taxable income by deducting their interest on loans up to $1 million. In simple English, that can translate into $2,500 in savings for many middle-class homeowners who declare $10,000 in interest.

But both Hillary Clinton and Bernie Sanders have pledged to cap the tax savings that Americans receive through all of their deductions (which would also include charitable donations and medical expenses) at 28%. Under Sanders, this would apply only to households raking in more than $250,000 a year.

There is a currently a small limit on itemized deductions depending on the filer’s tax bracket.

The takeaway: No matter who wins the race, homeowners will still be able to write off those payments. However, those deductions may not be worth quite so much if Clinton or Sanders takes office.

Got it? Now that that’s out of the way, let’s look at what each candidate could mean for those struggling to save up for a down payment on their dream homes as well as owners who rely on various property-related breaks.

The former secretary of state is the only candidate who has released a plan on homeownership (thanks, Hil!). We’ll boil it down.

What she’ll save Americans: Clinton plans to help lower-income, aspiring homeowners move into their own homes through a $25 billion housing investment program.

The former first lady has pledged to support matching funds up to $10,000 in down payment savings for households that make less than their area’s median income. (That’s one big chunk of change!) Without going into much detail, she pledged to fund the program through increased taxes on financial firms—that’s right, the very guys who ushered in the housing collapse in the first place.

She also plans to increase the number of affordable rental properties, especially those situated in areas with good schools and employment opportunities.

And Clinton supports using more low-income housing tax credits to help renters meet their monthly payments (especially as the monthly bills continue to soar around the country) and save for a down payment to actually buy a place.

What she’ll cost Americans: Not much. Clinton doesn’t plan to change the current tax rates, except to raise them on those earning more than $5 million. (But those folks don’t exactly need a lot of help coming up with a down payment!)

The takeaway: Another Clinton in the White House could be a boon to lower- and middle-income Americans by making rentals more affordable and helping them with the down payments needed to move into their own abodes.

What he’ll cost Americans: The U.S. senator from Vermont has unabashedly pledged to raise taxes of all varieties in order to fund such feel-good populist initiatives as free public college and lower-price health care.

So get ready to shell out. Yeah, that means you, whomever you may be.

The annual income tax payouts to the federal government would go up at least 2.2% across the board—more, for households raking in over $250,000. Rates would top out at more than 50% for those lucky souls earning more than $10 million a year.

Feel the Bern: Those hikes would mean Americans earning about $85,000 a year would wind up paying an additional $3,164 to Uncle Sam, according to estimates from the Institute on Taxation and Economic Policy.

Workers would also fork over an additional 0.2% of their compensation in a payroll tax (employers would kick in another 0.2%) to pay for employee family and medical leaves.

Businesses, meanwhile, would be charged a new 6.2% payroll tax to make up for the fact that, under Bernie’s plan, health insurance would now be provided by the government, not employers.

Workers “will see their salaries decline … because employers are going to pass the cost of that tax on to their employees,” warns Kyle Pomerleau, director of federal projects at the Tax Foundation, a Washington, DC–based tax education and advocacy group.

What he’ll save Americans: Despite these billfold-burning hikes, plenty of Americans could wind up doing better financially if Sanders moves into the Oval Office.

Those signature Bernie planks—free public college tuition and Medicare—could save folks tens of thousands of dollars.

For instance, undergraduate tuition and fees averaged $9,410 a year at in-state, public, four-year schools and $32,405 at private schools in the 2015–2016 school year, according to a College Board report.

Students graduated with an average of $28,950 in debt in 2014, according to an Institute for College Access & Success report. Alleviating that oft-crushing financial burden could make it easier for younger prospective home buyers to take the plunge.

The takeaway: Spend more on taxes! Save more on other stuff! Do the math.

What he’ll save Americans: Quite a bit. The Texas senator says he would slash federal taxes for everyone to a flat 10% rate. And he’s proposed ending the 15.3% existing payroll tax, which is split between employers and employees to pay for Social Security and Medicare. Those earning about $85,000 would save an average of $2,707 through the cuts, according to the Institute on Taxation and Economic Policy. Those earning $148,000 would pocket an additional $12,395 annually.

Ka-ching! But not so fast.

What he’ll cost Americans: Cruz would also create a business flat tax that would charge employers an extra 16% on their profits and payrolls.

Those extra charges would get passed on to both workers, whose paychecks could shrink, and consumers, who would see prices of goods and services go up, says Pomerleau of the Tax Foundation.

And it’s unclear if home sellers would be considered a business and then taxed on their proceeds under the Cruz plan, Pomerleau adds.

“That would be an absolute disaster for the real estate market,” says Jonathan Smoke,realtor.com®‘s chief economist.

Cruzin’ for a bruiser: Cruz has also promised to end local and state deductions Americans typically write off—including property taxes. This would help to fund his broader tax cuts.

The average household pays an average $2,127 a year in just state property taxes, according to WalletHub. And those taxes don’t include those leveraged by cities, counties, and even local water jurisdictions.

Residents in more expensive communities shell out more annually in the taxes and would therefore be hit particularly hard.

The takeaway: Cruz could help aspiring homeowners bulk up their savings accounts. But don’t be fooled by the big tax cuts—you’re likely to be paying more elsewhere.

The governor of Ohio hasn’t yet released a comprehensive tax plan, so we’ve consulted with our favorite psychic, Madam Tangina—and taken a close look at what Kasich has done in his home state—to try to get a clear-eyed view of how his presidency might affect America’s housing market.

And you know what? We still have no idea!

Kasich has been waving that heavy dark horse candidate banner for so long his hands have apparently gotten too tired to write out his policies. Poor John!

What he’ll save Americans: He’s pledged not to touch the mortgage interest deduction, so homeowners everywhere can breathe a sigh of relief.

What he’ll cost Americans: What we do know is the richest Americans would rejoice that Kasich has promised to cut the maximum tax rate from 39.6% (for the highest earners) to 28%. There’s no word yet on what they would be for the rest of us.

The takeaway: Flip a coin.

The business mogul/steak salesman knows a thing or two about the real estate market—and making (and losing) lots of money.

Rates would rise to 20% after that for the next $100,000 for individuals and $200,000 for married filers. Those making more than that would be taxed on those additional earnings at 25%.

Business owners could pay a lower rate, maxing out at 15%.

But there are no guarantees that this would have any real impact on the middle-class home market.

“Building a $40,000 nest egg [for a $200,000 home] can take a while—even if you have a $5,000 tax cut,” says Roberton Williams, a senior fellow at the Urban-Brookings Tax Policy Center, a Washington, DC–based think tank. “The bottom line is the rich are going to get big tax cuts and the middle class are going to get moderate tax cuts.”

This scenario would be possible if there was a budget shortfall due to the lower taxes and not enough money coming in through other revenue streams to plug it. The U.S. would be forced to borrow even more money, which could drive up interest rates.

Trump may also limit the deductions Americans can take off their federal taxes, but it’s not clear yet what exactly would be affected (such as property taxes) and how big those caps would be.

The takeaway: Americans would have more moola in their wallets under Trump through the federal tax cuts. But they might see higher interest rates and fewer tax deductions. They’d have one hell of a big wall, though.